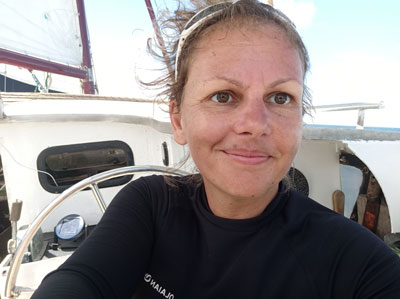 My name is Emma, I was born in the Normandy countryside, in North West France, in 1981.

I am one of those people whose life one day made a U-turn.
I grew up in a remote rural corner of France, close to nature, between sheep and cows, tadpoles and swallows. My hobbies were drawing, riding my bike, building a treehouse, etc. Watching TV was never my thing. I dreamed of joining an art school and I wanted to discover the world, to travel and to live in a bohemian way.
It didn’t really go like that. From 19 to 32 years old, I lived in Paris and worked an office job, mainly in project management in the field of databases and in the development of business applications. All this in the city and its suburbs, in a world of marketing and mass distribution. I mostly taught myself, especially in computer science. The business world around which I gravitated was the polar opposite from my comfort zone but eventually I found in coding a creative and stimulating side that kept me motivated. Coding wasn’t as bad as the rest and it allowed me to escape in some way. I had the programming spirit but not the one of commercial negotiation.
In 2010, I carried out a skills assessment with the Paris Chamber of Commerce over several months, which sent me back to school for 1 year to obtain a second degree in Multimedia Web Developing. I had originally planned to reorient myself towards crafts (lacquer art especially, a passion of mine) but the chances of obtaining funding in this area were almost non-existent and I did not have the means to self-finance it. So I went back to computer work.

Then in 2013, I had a burnout. The proverbial straw that broke the camel’s back. Paris, the suburbs, the hours lost in transport, the lack of sleep, the lack of interest in what I was doing, to be navigating in a world with values that were antithetical to mine. I felt like I was wasting my time, surviving instead of living and that the world around me was going crazy.

… So I decided to leave everything and start again…

And that’s when everything changed radically.

I took an extended leave and without any specific plans, I decided to accept an invitation from my brother to visit him in French Polynesia. He had been living there on his sailboat for 6 months and it seemed to be paradise. When I got there I had a hard time adjusting to this new reality. I thought this was the kind of lifestyle reserved for others, people you see in the magazines, in the movies. I had never set foot on a sailboat before and even trying to dive a few meters down seemed a huge achievement…
I stayed almost 3 months on my brother’s boat between Bora Bora & Raiatea, swimming and diving every day with sharks and rays, visiting the reef and making friend with the fishes of each coral patch, etc … It was magical. Being away from media and the civilized world also helped to take stock, to rest and to think about my life without interference.
With only 1 month to go before my return flight to Paris and my old life, I decided to go visit some other islands on my own : Moorea and Tahiti… I stayed in hostels, but even though they were on the beach in idyllic settings, I already missed the life afloat. I had caught the virus …

One day in December 2014, I rented a car in Tahiti to tour the island with other backpackers. In the remote southern corner near Teahupoo, we picked up a hitchhiker and dropped him a little bit further near where his boat was anchored. It was Tom.
One week later, I boarded Karaka as crew and burned my return ticket.
And There you go ! 8 years later, my life has changed completely.
I live to the rhythm of nature and the seasons, the rhythm of the sun, even if sometimes the cat wakes me up too early (grrr).
We are far from the media, supermarkets, over-consumption and city stress.
On Karaka we create, we tinker, we are active, we party … we live.
Sometimes it’s not easy, because a boat is a lot of maintenance, the salty air is quite destructive, and also we are dependent on the weather, but it’s so worth it!
I think that in life we need a community, a sense of purpose greater than ourselves. By discovering and meeting different people, sometimes we are able to say “ok, that’s suits me”, or “that, I could do as well”,“ if he did it, then I can too”, etc… and that way we learn and grow.

I am happy and fulfilled with Tom on Karaka and it is a pleasure to welcome and take the time to introduce our sea gypsy way of life to new people and turn them into sea vagabonds too! 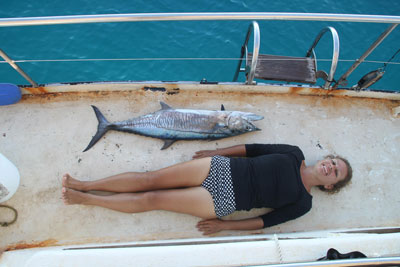