Tom found Karaka abandoned in June 2004 as she was rusting away in Causeway Bay Typhoon Shelter on Hong Kong Island.

Karaka was built in in New Zealand by an Auckland mechanic, in his garage. It took him 12 years and he definitely put a lot of attention to built a strong, well made boat. 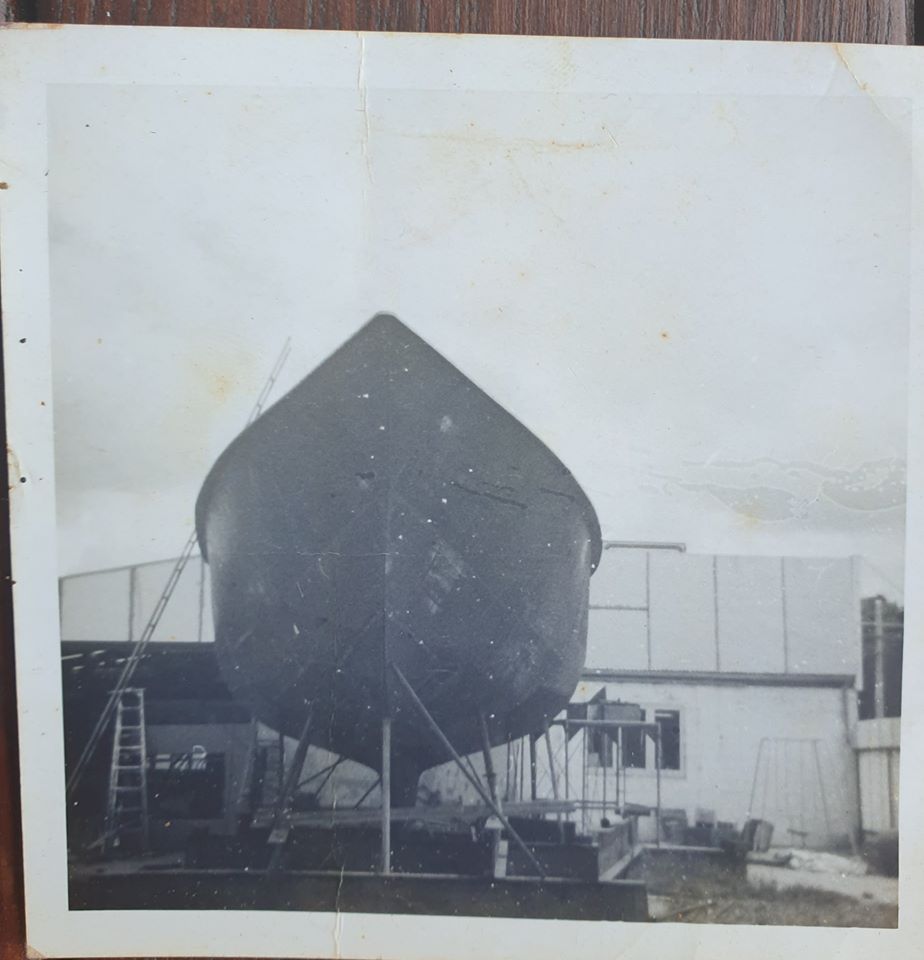 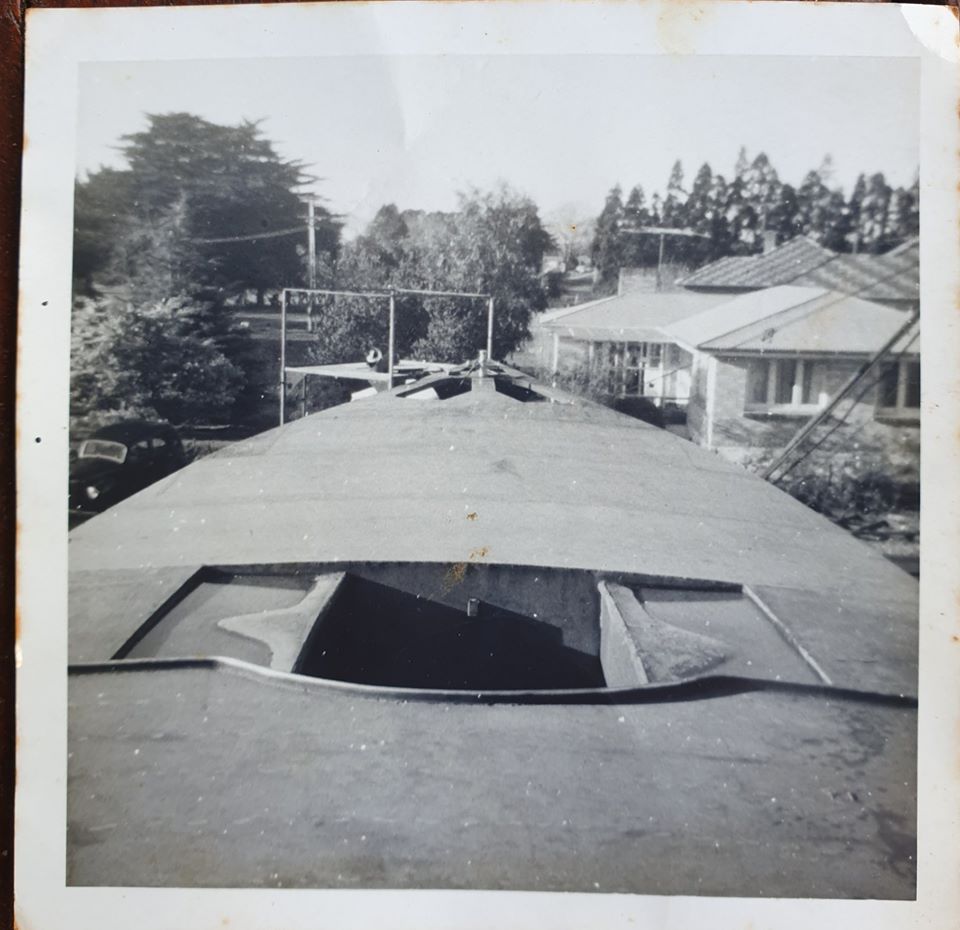 Reports have reached me that she originally had a orange hull and superstructure, AstroTurf (fake grass) on deck, and that the interior was outfitted in fur (yeah for the 70s!). 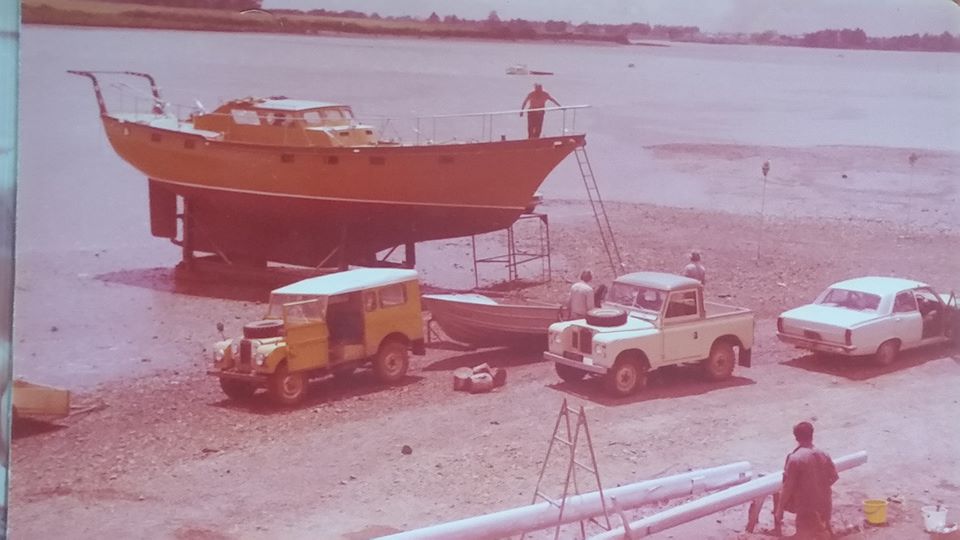 The new owners, Ron, Brenda and their two kids, moved on board and went cruising. They took the boat from New Zealand to Australia, up toward the Solomon island where they stayed for a few years doing charter while outfitting the boat for long distance sailing. They then moved on toward Asia, Singapore, across the Indian Ocean and up the Red Sea and into the Med. They did a refit in England at some point, sailed across the Atlantic to the Caribbean, crossed the Panama canal and then sailed home to New Zealand through the Pacific in 1987. Once back home they exchanged the boat for a farm property in Australia.

The second owner took her to Fiji and to Australia. A notable event was that Karaka won the Auckland to Melbourne race in the cruiser class in 1988.

The first owners, who by then had set up a yacht brokerage company, arranged the re-sale of Karaka to a New Zealand family of 5 in 1992, who then took her north to Hong Kong through Papua New Guinea and Micronesia. They lived on board in Hong Kong for five year and then moved to Phuket in Thailand, leaving the badly maintained boat to rust in the Royal Hong Kong Yacht Club. They had the idea of keeping her and actually devoted a fair amount of time and money in a refit but got discouraged and eventually abandoned her.

The Hong Kong port authorities threatened to demolish her in 2004 before the owners could muster resources and time to come back to give her a new life.

Tom first saw the boat in the marina after sailing there from Australia and noticed the warning for removal placarded on her side. Tom inquired, expressed his interest, and instead of letting the boat go to scrape, the previous owner kindly decided to let him have it for one symbolic dollar. Tom was 23 at the time. 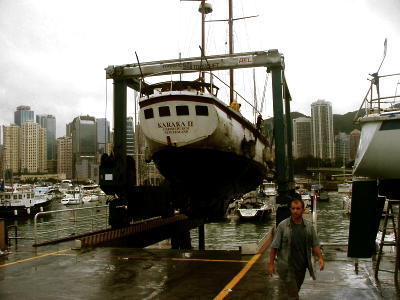 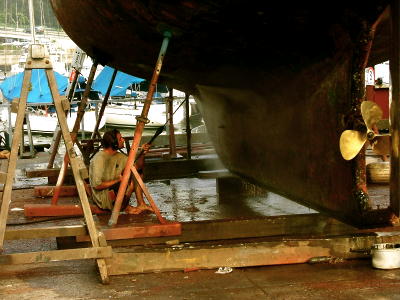 The boat is made of steel, with a nicely shaped round bilge full keel.

The plates on the hull are 6mm thick and on the deck 5mm.

She displaces between 25 and 30 metric tons depending if the tanks are full or not.

She has center cockpit with pilothouse, and is flush deck the whole deck is level. 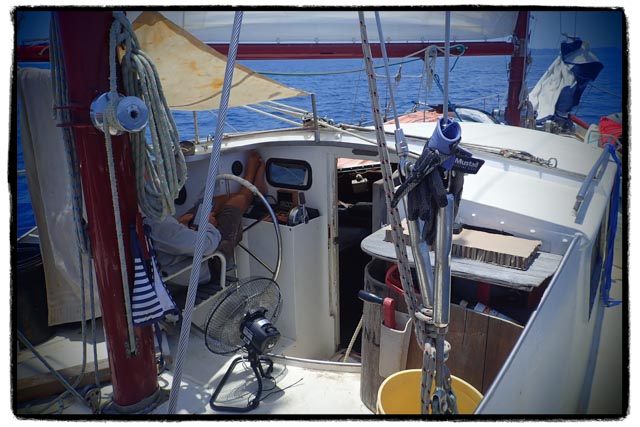 As a ketch she is two masted, the bigger one being the one in the front.

Usually we set 3 sails when underway. She is very well designed and is quite fast for this type of hull, and quite easy to handle.

2 experienced people is enough for any passage and I’ve sailed her solo on occasion.

For the sailing particulars, refer to the “Sailing” page. 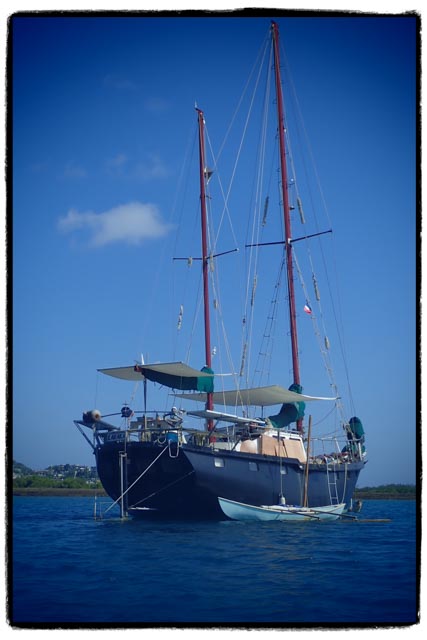 She is a voluminous boat, so living quarters are roomy, more than usual on a yacht.

Apart from the big owner cabin in the back, there are no other private cabins. Bunks are spread a little all over.

The galley is adjacent to the saloon so the cook doesn’t feel left out when cooking.

There isn’t much privacy, but not less than on any other boat.

8 crew living on board would be the top limit for comfort. 5 to 7 is ideal.

We have a very big engine room with a fully equipped workshop and a big diesel generator in addition to the 110HP Ford engine.

The name of the place she was built was Karaka, which we guess is part of the reason the first owners gave her that name.

Karaka is also the name of :

And several other meanings all over the world, one interesting being this one :

KARAKA / KHA-RAH-KHA  : a word that probably comes from the Arabic “karrâka”, meaning easy Vessel, a large sailing vessel used between 14-17th century, and was intended for cargo transport.