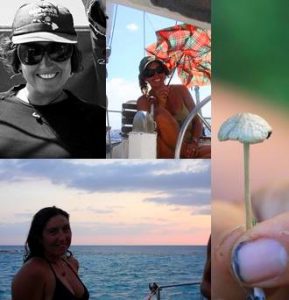 Tara is a mermaid. Originally from Hawaii, she has been living in Northern California for a while now, where she studied mycology. She first joined us in the Carribean and stayed for about six months. Hooked on sailing, she then alternated her life in northern Cal with crew positions on sailboats a bit everywhere. She came to visit several time while we were in La Paz in 2011 and 2012, boatsitting Karaka for us when we went to visit family in France, and finally coming to join us again in december 2012 in Mexico for another six month stint as we sailed down central America. Karaka is definitely her second home at this stage and she is recurrent feature on board. She comes and goes as she pleases, usually visiting at least once a year. She has been looking for a boat of her own for a while now, and early 2014 Tom even went to California to assist her in her search. They didn’t find her dream boat but they sailed together back to Tahiti from San Diego as crew on somebody’s else boat.