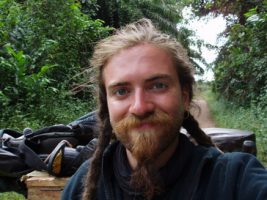 Pierre is Tom’s younger brother. He got a masters in History, and his memoirs subject was the French east India company, the sailing ships of the 1700… In a lull between two years at university, he bought himself a 125cc Honda bike and came to see Karaka, driving through the Sahara and the jungles of Congo all the way to Tanzania and then spend a couple month a board before heading back to France with his bSike. He came back and spend 3 month on board for the Amazon trip. He also came just after the barracuda accident in Cuba and helped Karaka to sail out of the cyclone zone before the onset of the stormy season. He then went to rebuild and run an hostel/bar in an old colonial house on the island of Sao Tome, off the coast of Africa. After he sold it in 2014 he came to meet us in Tahiti and sailed on Karaka for a while before taking a job as an art teacher in a high school on Hiva Oa, in the Marquesas islands.
Pierre is also the one who drew the nice karaka plans.