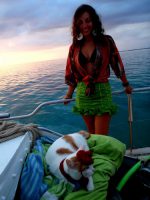 Genny is a bartender in Yosemite national Park. She first joined Karaka in 2008 in Tobago and sailed in the Carribean for a few months. She was supposed to come join the crew again In Costa Rica in 2013 with her boyfriend Daniel, but the trip down from Mexico took longer than expected and they didn’t get the chance to sail very much with us. They still managed to crew for some short trips in Northern costa Rica.