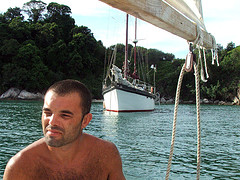 Francesco is an old shipmate of mine, from the times when I was sailing on the schooner Ranger in Central America. We always kept in touch and after several adventures all over the seas, he finally accepted my invitation to join as first mate when i was getting ready to cross the Indian Ocean. Everybody loves his bikinis. He got some nice pictures on www.flickr.com/photos/64405703@N00/ from his time on Karaka, and now he has his own ship, and is cruising in the Indian Ocean.
He is looking for crew so for those looking for a crew position, go check his site.