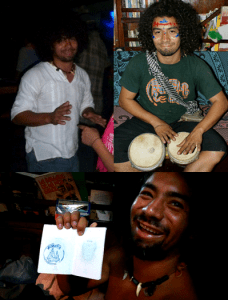 We first met Cesar during the first big party we had on board after we arrived in La Paz in january 2011. A biology student at the local university, he was invited by some other people we ourselves had invited. He quickly proved himself the life of any party, not only for his sunny personality but also because he would never show up without a retinue of pretty girls and a bottle of the best tequila available. When we left for the Pacific on Orianne he asked us for a genuine australian didgeridoo, for which he paid with 5 liter of his wonderful tequila. He gets that aged organic tequila directly from a small producer His family knows in Jalisco. When we came back to La Paz late 2012, he expressed an interest in crewing on Karaka for a while. We had to wait for him to finish the last of his veterinarian exams before we set sail for Costa Rica. He came on board with over 20 liters of his tequila as a trading good, planning on financing his trip by reselling it along the way.